I had the good fortune of getting some free goodies from American Soda in exchange for reviewing them here. I got in touch with them for the opportunity because I really love shopping with them.

As many of you know, I am a displaced American. I was born and raised in California, but am and have been living in the UK for over eight years now. One of the difficult things in living so far away from home is that I miss a lot of the food that I used to be able to get back home but is not available in stores here. That's where American Soda comes into the picture.

At American Soda, I can buy many of my childhood favorites, such as the ones sent to me for review: Lucky Charms cereal, Hershey's chocolate, Angel Food Cake Mix, Nabisco Honey Maid Graham Crackers, Jell-O Pudding and Diet Mug Root Beer. 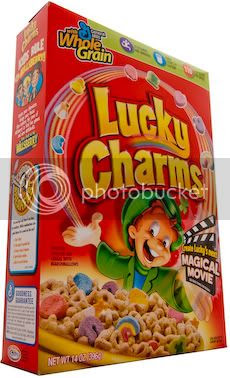 Lucky Charms is in no way, shape or form a health food. It is very high in sugar. But I remember it from my childhood, and I loved it as a child. My children, who are notoriously picky when it to comes to cereals, all love Lucky Charms too. Most of the time, instead of giving it to them for breakfast, I just put a small amount of it into a small bowl or cup and let them munch on it dry as a snack. For me, since I believe in moderation and in allowing myself to eat small amounts of the things I love, I occasionally allowed myself (while the box of Lucky Charms lasted) a half-serving which equalled 55 calories (3 syns). This way I catered to my cravings but didn't ruin my diet. (I lost a pound this week, so it didn't hurt my weight at all.)

To see what my youngest four children thought of the cereal, in their own words, go to Children Review's blog post on the subject.

My favorite of everything sent to me was the Diet Mug Root Beer. Even in the US, it is sometimes hard to find the diet version of Mug Root Beer. And buying root beer of any kind in the UK is nearly impossible. Mug is my favorite and one of the things I sorely missed when I moved out here. I missed it so much that on the rare occasion when a family member from the US flew out for a visit, I always made sure they'd bring a 12 pack or 24 pack of Diet Mug Root Beer with them! I love to sit and relax with a can of Diet Mug Root Beer. I'm just sad that they only sent me one!

I wanted to mix some vanilla extract and sweetener into some 0% fat Greek Yogurt and freeze it, then try adding a scoop of it to a glass of my diet root beer to see how close it came to tasting like a traditional root beer float, but they only sent me one can, and I drank it straight away. For people on low carb diets, they can add some cream to a glass of diet root beer and get the same foamy flavor of a root beer float as they would get with a traditional one. And for people who prefer their root beer caffeinated, American Soda also sell Barq's. 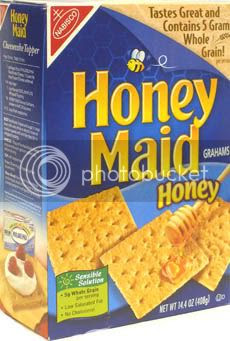 As for the graham crackers, they are whole grain and low in fat. My kids love to eat them plain or to make s'mores out of them using marshmallow cream and Hershey's chocolate and then heating it for about ten second in the microwave, but I didn't have marshmallow cream (although that too can be bought at American Soda), so they didn't get to do that. What I like to use the graham crackers for is to make a healthier version of pie crust. It's especially tastey made into the crust of a healthy pumpkin pie (I use the pumpkin pie I buy from American Soda) or a healthy cheesecake. You just add an ounce of light margarine or low fat spread to about ten crumbled and crushed graham crackers, mix it up and spread it into the bottom of a pie tin. Then refrigerate it for a few hours and it's ready to add your pie or cheesecake filling to. 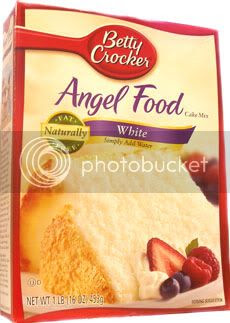 The Angel Food cake mix I have bought in the past. Last time I bought it, I made Angel Food cupcakes, topped them with frosting made with greek yogurt, quark, sweetener and vanilla extract, and then added some strawberries to them. I took them to one of my Slimming World meeting's Bring & Try nights, and everyone loved them! I made 40 cupcakes with one mix, and they were only about 2 syns a cupcake because Angel Food cake is fat free. And an added bonus is that my children also loved them!

I have yet to find any cake mixes in UK stores that are fat free like this one is! Angel Food cake is a very traditional American cake that can be found at almost every supermarket in the US, either pre-baked in their bakery section or in mixes for you to make yourself. It makes a great cake for making a healthy strawberry shortcake. 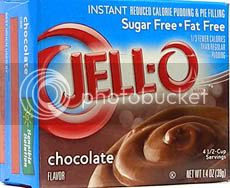 With the Betty Crocker Angel Food Cake mix sent to me this time, I plan on making a slightly different dessert. I was also sent Jell-O Fat Free Chocolate Instant Pudding mix. I'm planning on making the cake, cutting it into pieces, putting the pieces into bowls and then pouring some of the chocolate pudding over them. When I get around to making them, I will take some photographs and add the recipe to my recipe site. 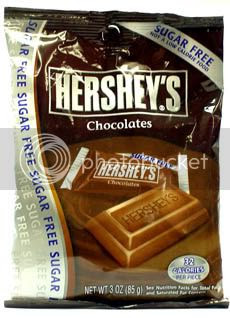 I was also sent something that I have never tried before. American Soda sent me a small bag of Sugar-free Hershey's chocolate minies. Robert tried one and seemed to like it. I loved it, although I did think it tasted a bit more like dark chocolate than milk chocolate, and I noticed the texture was just a tiny bit more waxy. My friend Helen tried one and she said she loved it. They were only 31 calories a piece, so that would be about 1 1/2 syns each on Slimming World.

When it comes to interacting with their customers and being responsive to their customers requests, American Soda is one of the few companies I have found that really gets it! They are on Twitter and on Facebook, and in both places, they offer coupons, respond to customer requests, and generally show truly wonderful customer service. There is another on-line company where I can buy my much-missed American goods here in the UK, but they are not nearly as interactive, and in this way, American Soda has made itself stand out.

Keep an eye on Skinny Dreaming Recipes over the next week as I will be adding some recipes created using these products as soon as I can make them and take photos of the results.

*I received a product for this review on behalf of the company. All opinions are solely my own. Others who may use this product or service may have different opinions.*
Posted by Becky Fyfe at 08:28 No comments: